In 1864, 44-year-old Joseph Julian Overbeck, a former German Catholic priest who had left the priesthood, disillusioned with papal supremacy, became Lutheran and later married, was chrismated into the Orthodox Church. He then published, in 1866, Catholic Orthodoxy and Anglo-Catholicism which contained the groundings for his work for the next twenty years. A year later, be began publishing a periodical, Orthodox Catholic Review, aimed at putting forward Orthodoxy and rejecting Catholicism and Protestantism.

1867 saw Overbeck, with 122 signatures from the Oxford Movement, petition the Church of Russia for the establishment of a Western Rite church in full communion with the Eastern Rite. A seven-member synodal commission was then formed, and invited Overbeck to attend. The idea was approved, and Overbeck set about submitting a draft of the proposed Western liturgy. The base of Overbeck's submission was the 1570 rite which added in an epiclesis and the Trisagion hymn. This rite was submitted in 1871, and was examined and approved by the commission. Overbeck focused his efforts on the Old Catholic movement, who had rejected Papal Infallibility. He continued to engage in polemics with Catholics, Anglicans and Orthodox converts using the Byzantine rite.

However, it went no further. Overbeck's marriage after his Catholic ordination was a canonical impediment to the priesthood, the Holy Synod of Greece vetoed his scheme amongst the Orthodox Churches, the Orthodox Catholic Review ended its run, and by 1892 he admitted failure due to the Church of Greece of the time. Overbeck reposed in 1905. 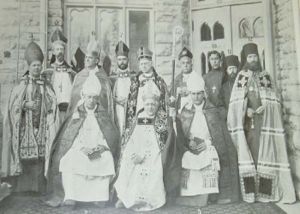 Episcopalian Consecration of Reginald Weller as co-adjutor bishop of Fon-Du-Lac, 1900.

The Western Rite continued. In 1890 a Swiss Old Catholic parish in Wisconsin, pastored by Fr Joseph Rene Vilatte, was received by Bp Vladimir (Sokolovsky); however, Fr Vilatte soon led the church into Old Catholicism. In 1911 Arnold Harris Mathew, an Old Catholic bishop, entered into union with the Patriarchate of Antioch, but parted ways soon after, leaving behind a model for future Western Rite groupings to join Orthodoxy. In 1926 the six-parish Polish Catholic National Church was received into the Polish Orthodox Church, flourishing until wiped out by the Nazis. [1] [2]

St. Tikhon's involvement in the Western Rite has been one more enduring. While he was head of the Russian mission in America, some Episcopalians were interested in the possibility of joining Orthodoxy while retaining Anglican liturgics. St. Tikhon, sending the 1892 Book of Common Prayer, enquired as to the viability of such an idea; in 1904, the Holy Synod admitted its possibility, including many notes on how the BCP could be used in an Orthodox manner. St. Tikhon did not receive any Episcopalians who used revised Anglican forms, but it lay the groundwork for the reception and liturgics of the Western Rite Vicariate. [3]

The Antiochian Archdiocese received the most stable and successful group of Western Rite parishes, the Society of Clerks Secular of St. Basil, in 1961. Upon reception, they became the Western Rite Vicariate, and their leader, Alexander Turner, becoming an Orthodox priest and the Vicar-General of the Vicariate until 1971. At his repose, Fr Paul W.S. Schneirla became Vicar-General.

Besides the parishes that were in the former Society, other parishes have been received into the Western Rite Vicariate of the Antiochian Archdiocese, especially because ofthe theological and practical devolution of the Episcopal Church U.S.A. Added to this, several Western Rite missions have been founded, some growing into full parish status.

The Church of Russia received a New York Old Catholic community in 1962 as Mount Royal Monastery, which later moved to Woodstock, New York, under Archbishop John (Wendland) of the Russian Exarchate of North America. Later, this community was received by the Russian Orthodox Church Outside Russia, under Archbishop Nikon (Rklitzsky). In 1993, the monastery was renamed to Christminster and moved to Providence, Rhode Island, under Bishop Hilarion of Manhattan (since transferred). It's present abbot is Dom James Deschene.

In 1995, the Church of Antioch also established a British Deanery to absorb converts from the Church of England. Not all of these parishes are Western Rite.

Western Rite Orthodoxy, in Australia and New Zealand, has arisen mostly from Anglican and Continuing Anglican communities. Archbishop Hilarion (Kapral) of Sydney, ROCOR, received some communities under his omophorion; while others have been received by Bishop Gibran and Metropolitan Archbishop Paul, both under the Church of Antioch.

Other small groups following the Western Rite have been received, but usually have either had little impact, or have declared their independence soon after their reception.

Some Western Rite parishes are also in the Oriental Orthodox churches. The Syrian patriarchate of Antioch consecrated Antonio Francisco Xavier Alvarez as Archbishop of Ceylon, Goa and India in 1889, authorizing a Roman rite diocese under him; in 1891, the Syrians consecrated the aforementioned Joseph René Vilatte as archbishop for the American Old Catholics.

North American Western Rite parishes generally follow one (or sometimes both) of two types of traditional Western liturgical traditions. The majority celebrate the Liturgy of St. Tikhon of Moscow, which is an adaptation of the Communion service from the 1928 Anglican Book of Common Prayer and The Anglican Missal in the American Edition, as their Sunday liturgy. Until 1977, all Western Rite parishes celebrated only the Liturgy of St. Gregory the Great, which is a modified form of the ancient Mass known to Roman Catholics before the liturgical reforms of Vatican II in the 1960s. Many parishes within the Western Rite Vicariate continue to celebrate the Gregorian liturgy. However, most WRV parishes celebrate more than one weekly liturgy, and many of the Tikhonite parishes celebrate the Gregorian liturgy on weekdays. The complete Roman rite of Benediction is also authorized.

The Western Rite liturgy has much less repetition than its corresponding elements in the Byzantine rite, and generally has a more brisk, succinct manner to it. Celebrants wear distinctive Western vestments, and the faithful follow pious devotional customs particular to their tradition, as well.

The development of the current use within the Western Rite Vicariate is of particular note:

Metropolitan Antony was well aware that the Western Rite was “a work for specialists.” The new Western Rite usage of the Archdiocese was to be guided by “a Commission of Orthodox Theologians,” an advisory committee of qualified clerics or laymen to advise the Metropolitan and determine “the mode of reception of groups desiring to employ the Western Rite, and the character of the rites to be used, as well as the authorization of official liturgical texts.” The first WRV Commission, convened by Metropolitan Antony in 1958, was composed of Fathers Paul Schneirla, Stephen Upson, Alexander Schmemann and John Meyendorff. Schneirla, Schmemann, and Meyendorff in particular had seen the Western Rite up close in France, as it had been approved in the Russian Ukase of 1936. Schneirla recalls Schmemann’s work in particular as being key, as he was familiar with the Liturgical Movement within the Roman Catholic and Anglican communions. Schmemann was particularly instrumental in joining together the separate Rites of Initiation of the Rituale Romanum – Baptism, Confirmation and First Holy Communion – into one unified rite, according to the Orthodox understanding.

In January of 1962, the official Western Rite Directory was issued, “establishing liturgical usages and customs and discipline,” drawing on principles gleaned from the 1904 Moscow Synodal response to Saint Tikhon, the authorization of Western Rite offices by Metropolitan Gerassimos (Messarah) of Beirut, and the 1932 Russian Ukase of Metropolitan Sergius.[4]

The Russian Orthodox Church Outside Russia (ROCOR) also has a small number of Western Rite parishes in addition to two monasteries, one located in Tasmania and another in Rhode Island which follows Benedictine liturgical traditions. The former, St. Petroc Monastery, uses the Sarum Rite liturgy in English. Missions and Parishes of the ROCOR Western Rite in Tasmania use either the Sarum or "The English Liturgy," an English Use service based upon the 1549 Anglican Book of Common Prayer but incorporating certain elements of the Sarum Use.

The abbot, Dom Augustin (Whitfield), who led the latter monastery of Mount Royal, now named Christminster (or Christ the Savior Monastery), into communion with ROCOR, once remarked to St. John Maximovitch that it was difficult to promote Western Rite Orthodoxy, whereupon the saint replied: "Never, never, never let anyone tell you that, in order to be Orthodox, you must also be eastern. The West was Orthodox for a thousand years, and her venerable liturgy is far older than any of her heresies."[6]

The Orthodox Church of France—which is currently of ambiguous status with regard to world Orthodoxy, but at one time was cared for by St. John Maximovitch and later by the Church of Romania—also uses a Western Rite liturgy based on ancient Gallican liturgical materials, though often supplemented by Byzantine elements.

In addition, the Holy Synod of Milan, an Old Calendarist group, has a few communities (including one monastery, in the United States, in West Milford, New Jersey, the Abbey of the Holy Name) which worship according to Western rites, including a restored Sarum Rite, which differs significantly from that used in ROCOR.

It should also be noted that there are a number of groups who follow various Western rites and may call themselves Orthodox but are not part of or in communion with the historic Orthodox Church.

The Western Rite in the Orthodox Church is not without its critics. Objections are made in regards to desire for liturgical uniformity within Orthodoxy and fears that Western Rite vicariates or similar Western Rite practices have produced a para-ecclesiastic organization within the Church. Some question the sincerity of Western Rite parishes as all or mostly-convert groups. Finally, lack of organic liturgical continuity for the Western Rite troubles some Orthodox Christians.

On the other hand, some Byzantine Rite Orthodox Christians do not recognize the Orthodoxy of those in the Western Rite (despite their being under the jurisdiction of Byzantine Rite bishops with whom they themselves are in communion), and will not attend the Eucharist at Western Rite parishes, declaring them to be "Roman Catholics," "schismatics," or "reverse Uniates." However, no Orthodox parish may deny the Eucharist to visiting faithful of the canonical Western Rite, regardless of their feelings about the concept of Western Rite Orthodoxy. As yet, there are no schisms within the episcopacy of the Orthodox Church regarding the issue of Western Rite parishes.